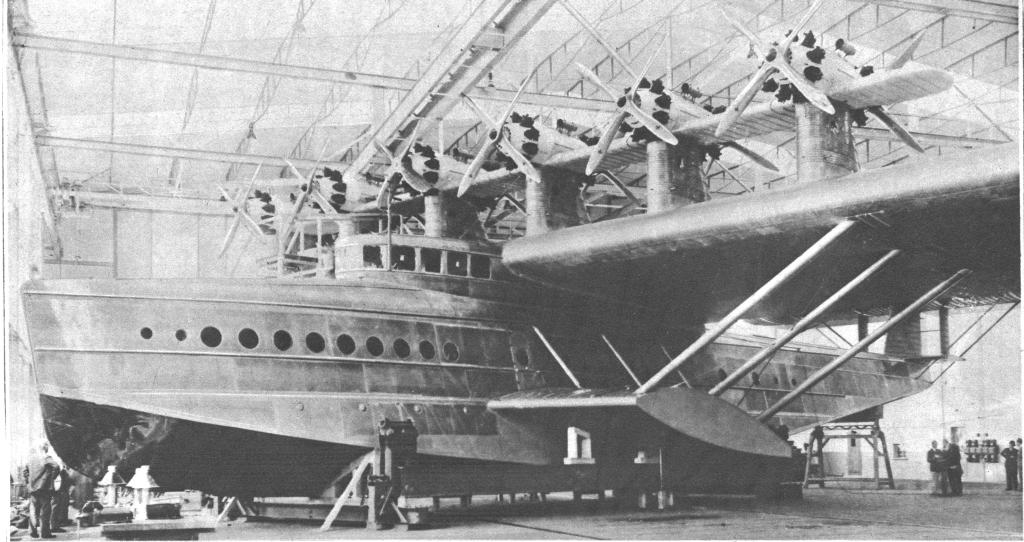 I got interested (again) in aviation history when I bought thirty years ago at a jumble sale an old scrap book with photographs of the Dornier Do-X. The picture shown above carried the caption (in Dutch):

1929
THE BIGGEST AIRPLANE IN THE WORLD, the Do X, has recently been completed in the halls of Dornier in Friedrichshafen and will make soon its first test flight. This immense aeroplane has a length of almost forty meters; the span of its wings comes to 48 meters and its height is 8.5 meters. The giant will be propelled by no less than 12 large Siemens Jupiter engines with a total power of 6200 hp. The fuel tanks are in the bottom of the airplane reducing the danger of fire almost completely. The number of passengers that can be transported is astounding: no less than 100!
There is a crew of twenty needed to control the airplane and serve the passengers. The creator of this enormous colossus, Ir. Dornier, has stated that three or four of the engines may be stopped during flight without problems. However, the crossing of the ocean is not yet possible with this giant – it is not more than a step forward on the difficult road to trans-oceanic air traffic. On the photograph the immense monoplane is shown in the assembly hall of the Dornier factory.

The Germans have always been very proud of their Do-X – and rightly so – but of course in 1932, as predicted, it failed where five years earlier Charles Lindbergh had succeeded without apparent effort:
a simple non-stop jump across the Atlantic.

I wondered why this would be so and started to read (+ collect) books about 1930-flying boats and airliners. What were the factors that determined their long-range performance? How fascinating that era was!

Next I got into a correspondence with a certain Don Middleton, a British aviation journalist, who had stated in an English monthly that the amazing long range of the Consolidated Catalina patrol boat was due to its ‘Davis-wing’. Based on general data from Jane’s ‘Fighting Aircraft of WWII’ edition I undertook to compare four contemporary transport planes: the Douglas DC-3 and DC-4, and the Consolidated Catalina and B-24 Liberator, and proved to him that Catalina’s extreme performance was based on two factors: its light construction (empty weight approximately 50% of take-off weight) and its slow cruising speed, which was right at the optimal economic flight point (maximum  CL/CD ratio). The other three planes, for commercial or operational reasons, all cruised faster than their most economic speed and as a consequence had a comparatively shorter range. The Cats were slow, real slow, to the exasperation of their crews. However, slowness could also be advantageous: they were able to shield the ships they were escorting by circling tightly around them, outmaneuvering in this way attacking German and Japanese aircraft that were much faster.

The PBY Catalina had no Davis-wing and I think I proved it, but Middleton never entered into a serious discussion and suggested I submit my paper to the Royal Aeronautical Society, which of course was a bit much. Later on I learned he disliked smart asses like me who argued from theory: he had been a skilled aircraft worker at de Havillands himself and a RAF engineer during the war.
Of course the Davis-wing was used on the B-24 Liberator. Next blogs will summarize what I know about it. The inventor, David R. Davis, [1] appeals to me because he was obviously a maverick: he worked outside the official circuits of Universities and NACA. Apparently he had a mind of his own.
As a result however, descriptions of his work are hard to find in official literature (like Abbott & Doenhoff; maybe Durand mentions him?). Apparently his wing had extreme low drag at small angles of attack (laminar flow?), which is remarkable, because long range (like Catalina’s) is usually associated with low engine power and therefore relative large angles of attack. So there were things here which were not quite clear to me. I wanted to know more about the wing profile: it must have been very thin with maximum depth near the middle of the chord. How can thin wings be made strong enough for long spans? This was the state of my comprehension (and confusion) until I found more information.

[1] A word of warning: there have been other aviators of fame with the name Davis. So is our man not to be confused with the unfortunate pilot Noel Guy Davis, who crashed short after take-off for a trans-Atlantic flight in 1927, aboard a Keystone Pathfinder (N-X179) airplane called American Legion.
[2] picture: PBY5 Catalina; credit: Wiki.

We exchanged some polite remarks while we heaved our bags in the rack above us and sought our proper place. We just fitted in our seats together: the blonde lady in sweater and jeans at the window, I in the middle and to my right the middle aged guy in safari jacket with long hair in a ponytail… Then we underwent in silence the start of the machine and the handout of some gorgeous delicacies like peanuts wrapped in tiny little plastic bags.

After a while the plane had climbed to cruising height and I bent forward to the left to look out of the window. I saw an elegant upward turned wing tip against the hard blue expansion of the universe and the faintly curved horizon of our planet.
“Isn’t it amazing?”  the lady smiled at me – “how we are sitting here crunching peanuts above the world?”
“It’s stunning,” I agreed. – “I was also observing the wing tip. There seems to be a fashion nowadays to bend them upward.”
“Well dear, it’s all about saving fuel you know. The proper shape may give you an extra 3 or 4 per cent range. It all counts with the present fuel prices.” (This conversation took place some years ago).
“How can that be?”
She explained: “The wings leave behind a corkscrew of whirling air, one at each side. It is an air vortex. In a way you may say that the airplane pulls the vortex forward. The bigger the vortex, the more energy it takes from the plane. With careful design of the wing tip the engineers try to make the generation of the vortex more gradual, less violent, see?” She looked at me and smiled.

“Yeah,” the man to my right added -“and these vortices are bloody dangerous for the little guy who is flying behind them. You better stay out of the wake of the big ones…”
And so it turned out to be a pleasant flight for all of us. The safari chap ordered a meal and offered me his dessert because he was, as he explained, a diabetic. The lady at the window knew more about airplanes than any of us. And I told them about Willy Fiedler who had built and flown a sailplane in 1933 with vertical wing tips and no fin at the tail. I even showed them a picture on my i-phone.
They were properly impressed.

We spent the rest of the flight with pleasurable chitchat. However, as always when flying, I lost my new friends at the Luggage Claim.  If we had traveled by steamship we would probably still be in contact now.

http://en.wikipedia.org/wiki/Wake_turbulence where you will find:

DescriptionAirplane vortex edit.jpg (see earlier picture)
Date  4 May 1990
English: Wake Vortex Study at Wallops Island
The air flow from the wing of this agricultural plane is made visible by a technique that uses colored smoke rising from the ground. The swirl at the wingtip traces the aircraft’s wake vortex, which exerts a powerful influence on the flow field behind the plane. Because of wake vortex, the Federal Aviation Administration (FAA) requires aircraft to maintain set distances behind each other when they land. A joint NASA-FAA program aimed at boosting airport capacity, however, is aimed at determining conditions under which planes may fly closer together. NASA researchers are studying wake vortex with a variety of tools, from supercomputers, to wind tunnels, to actual flight tests in research aircraft. Their goal is to fully understand the phenomenon, then use that knowledge to create an automated system that could predict changing wake vortex conditions at airports. Pilots already know, for example, that they have to worry less about wake vortex in rough weather because windy conditions cause them to dissipate more rapidly.

airplane construction interbellum – like Rohrbach and many other pioneers